The United States hasn’t had a real performance Honda since the S2000 got the axe in 2009, something fans of the H have lamented for the past 8 years.

Late last year, in Paris, Honda put the prototype Civic Type R out there, telling people that this new hot hatch would be the first Honda Type R ever sold in the United States, but wouldn’t give any other hints as to performance numbers.

That all changed in Geneva. Previous speculation that the Ohio-built mill found under the hood of current-generation European Type Rs would drag the new model down the road has been confirmed.

The specs are impressive. The 2.0-liter turbocharged four manages to put out 306 horsepower and an astonishing 295 lb/ft of torque. All of this is sent through a six-speed manual transmission – that even blips the throttle for you, matching revs – to the front wheels. While that kind of power usually makes a front wheel drive car torque steer all over the road, Honda says that their newest front suspension setup – dubbed the Dual-Axis – will help keep the car on the road.

Outside the car there’s no way anybody will doubt what you’re driving. This thing has all the wings, all the scoops and all the aggressive appearance Honda could throw at it. It even has a strange three-tip exhaust. It’s as if the engineers must have thought to themselves, “Dual exhaust is all the rage these days. Why not just add a third, smaller tip in between the two big ones?” 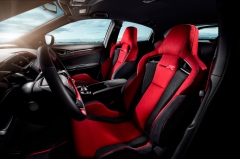 That’s not the case at all. According to Hideki Kakinuma, the project leader for the Civic Type R, at low rpms the exhaust is moving through all three pipes, giving it a “dynamic, roaring sound.” At mid-to-high rpms the center exhaust creates a negative pressure to reduce boom, something previous-generation Type R owners in Europe have complained about. If you’ve ever driven a car that has a booming and droning exhaust you’ll recognize this bit of trickery as A Good Thing.

We will hopefully have more information regarding pricing and expected delivery time when this new Honda hot rod takes the stage at the New York International Auto Show for it’s U.S. debut. Until then, stay tuned. If we get any more information we’ll definitely pass it on to you.